Hagia Sophia meaning 'Holy Wisdom' was built as a small church for the first time as a place of worship by the Byzantine Emperor Constantine in 360 on the present historical peninsula of Istanbul, which was then known as Constantinople. In 404, in the fire that occurred during the rebellions during the Arcadius period, the wooden structure with its roof was completely destroyed.

If you want to visit the unique historical monuments in Istanbul, such as Hagia Sophia, you can find a quick solution rent a car with a driver. Make a reservation for the Istanbul airport-Hagia Sophia transfer from the button below.

Although Hagia Sophia was rebuilt by the order of Theodosius II, this time with 5 naves and a magnificent entrance, Hagia Sophia has burned again in the Nika Revolt, which was the most violent rebellion that Constantinople had ever seen a century later.

Emperor Justinian I for the 3rd time commissioned Isidoros of Miletus and Anthemius of Tralles, one of the doyens of science, in 532 to design the Hagia Sophia, which still stands today, instead of the burning church.

The Greek Orthodox Church, whose construction was completed in 537, has been used as a place of worship ever since. Hagia Sophia, which was built as an Orthodox church about 1500 years ago, has been one of the works that are mentioned in power and power struggles as well as in the spiritual world throughout its history. In addition to all these beauties, the 4th Crusades also damaged the structure, apart from riots and earthquakes. Hagia Sophia suffered its share from the looting of the city during the expeditions, fell into ruin and unfortunately many of the works in it were stolen. 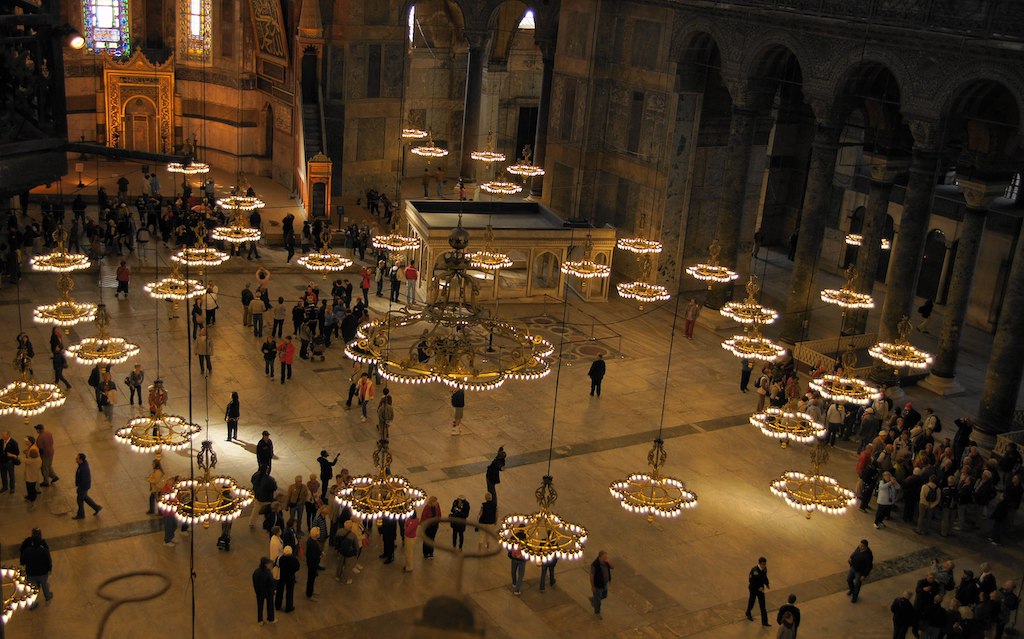 The architectural structure, which witnessed Istanbul from the Byzantine Empire to the Republican period, continues to be in the church-mosque-museum triangle.

According to the rumor, Justinian built the Hagia Sophia from all the regions under his rule: white marbles from Marmara, green somaks from Egriboz Island, pink marbles from Afyon, yellow marbles from North Africa in Egypt., columns brought from the Temple of Artemis in Ephesus South of Turkey.

Thanks to the 4 pendentives with angel figures in the center of the square structure, the gigantic dome originates from the mastery and high mathematical knowledge of the architects. The building, which has 3 naves, 1 apse, 1 inner and outer narthex, has 5 doors in the outer corridor and 9 doors in the inner corridor. The big door in the middle is where the emperor and his relatives entered. The most famous of the 104 columns of Hagia Sophia, 40 in the lower and 64 in the upper gallery, is the Wish Column. The reason for today is the belief that people who put their fingers into the hole in the column and rub the liquid in their hands on their wounds will be healed. It is rumored that this column, which is said to have flowed the tears of the Virgin Mary, helped Justinian's headaches to pass.

Magnificent mosaics that make Hagia Sophia fascinating: In the offering mosaic on the Vestibule Gate, Mary with the child Jesus in her arms is depicted, Konstantinos presents a model of the city on the left, and Justinian is depicted on the right, presenting a model of Hagia Sophia. Known as "Deisis" in the south gallery, and Mary,  Jesus. Mosaic containing the figures of John and the last court scene, Apse Mosaic, Zoe Mosaic, Emperor Alexandros Mosaic… 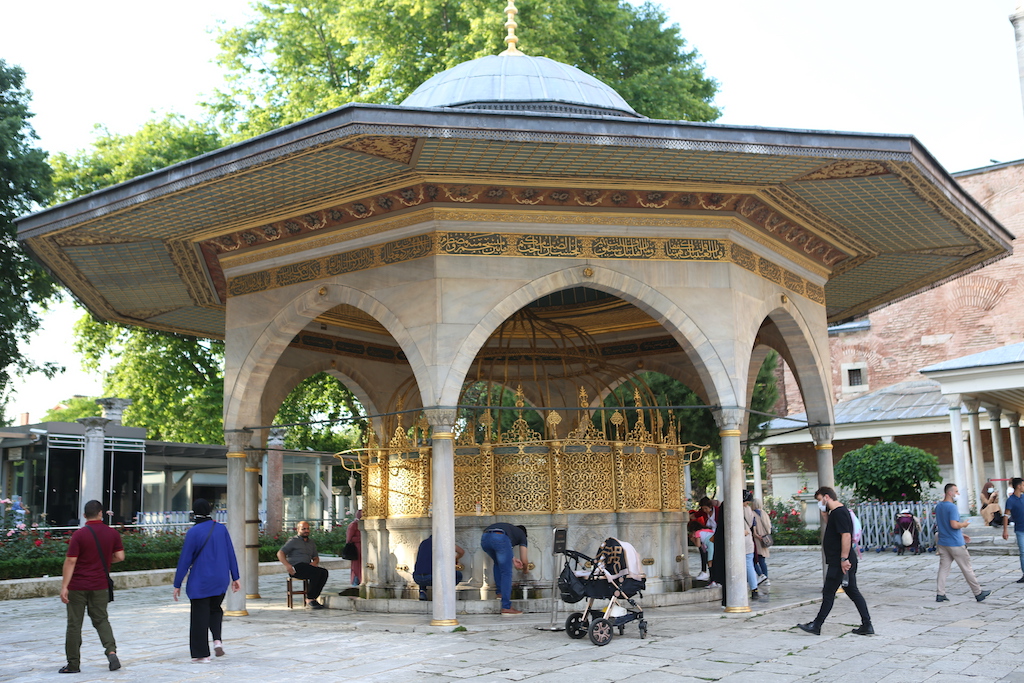 After Conquest Of Istanbul Hagia Sophia Converted To Mosque

After the conquest of Istanbul by Fatih Sultan Mehmet in 1453, a completely different period began for Hagia Sophia. The building, which was also used as a place of worship, was converted into a mosque for these Muslims. Human figures that were forbidden to Muslims during worship were covered with plaster, acceptable figures were not touched, and Islamic motifs were placed on the covered sections. The figure which is thought to embroider the Jesus was covered with gold mosaics.

While the Ottomans turned Hagia Sophia into a mosque, the retaining walls added by Mimar Sinan in the 1570s to strengthen the Hagia Sophia mosque have managed to protect Hagia Sophia to this day. This mighty structure, which has witnessed power struggles, earthquakes, and fires throughout history, was restored between 1847 and 1849 under the supervision of the Swiss Fossati brothers during the reign of Sultan Abdülmecit, one of the Ottoman sultans

Artifacts that remained under the plaster in the architectural structure, which was used as the Hagia Sophia Museum for 85 years, were also unearthed.

On May 29, the anniversary of the conquest of Istanbul, steps were taken to transform the Hagia Sophia museum into a mosque, which was also used as a political tool.

The Hagia Sophia Museum was removed from the status of a museum with the decision of the Council of State on July 10, 2020, and transferred to the Presidency of Religious Affairs by the President of the Republic of Turkey and turned into a mosque again. If you want to visit Hagia Sophia Mosque, you need to go to Sultanahmet Square in the Cankurtaran district.

Whether it is a church, a museum, or a mosque, Hagia Sophia will maintain its splendor as long as it survives.