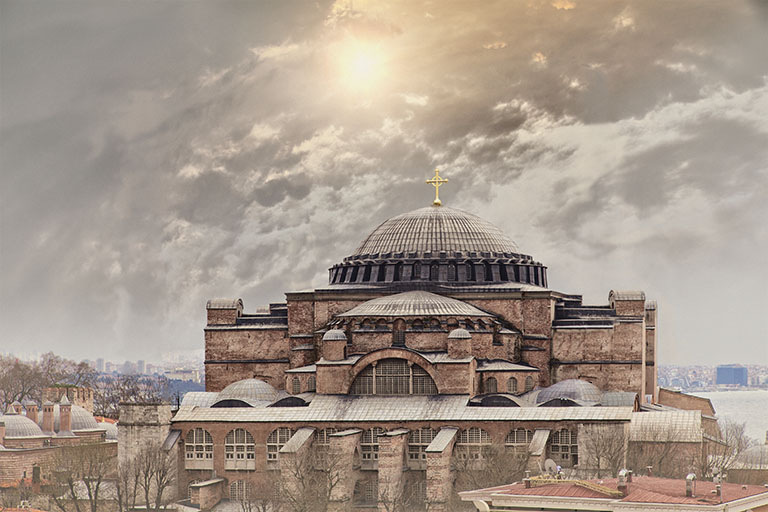 Byzantium (Provincial name of Istanbul) was one of the many colonies established along the Bosphorus and Black Sea coasts by Greek settlers from the cities of Miletus and Megara from the end of the 8th century BC. The Persian king Darius captured the settlement in 512 BC; During the 496 Ionian revolt, it was captured by the Persians, but the Persians took it back in a short time. A.C at 478, an Athenian fleet captured the area. As Athens' power waned during the Peloponnesian War, the Byzantines accepted Sparta's sovereignty. Although Alcibiades besieged and recaptured the city, Sparta declared its sovereignty again after defeating Athens in 405 BC. In 343 BC Byzantium joined the Athenian League, and three years later Alexander II of Macedon. He broke Philip's siege. The lifting of the siege was attributed to the divine intervention of the goddess Hecate and commemorated by the minting of coins bearing her star and crescent. Byzantium accepted Macedonian rule under the Great Alexander and regained its independence only with the decline of Macedonian power. In the 3rd century BC, the city's treasury was emptied to pay off the looting Gauls. This free city, attached to Rome, gradually came under imperial control and briefly lost its freedom under the rule of emperor Vespasian. When the usurper Pescennius sided with Niger in AD 196, the Roman emperor Septimius Severus massacred the people, demolished the walls, and subdued the ruins as far as the Turkish city of Perinthus (Herakle, or Marmara Ereglisi)

Later, Septimius Severus rebuilt the city on the same spot but on a larger scale. Despite being sacked again by Gallienus in 268, the city was strong enough to resist a Gothic invasion two years later. In subsequent civil wars and rebellions that occasionally broke out in the Roman Empire, Byzantium remained untouched until the arrival of the emperor Constantine I, who became the first Roman ruler to convert to Christianity. Defeating the army of rival emperor Licinius near Chrysopolis on September 18, 324, Constantine became head of the entire Roman Empire, east and west. He decided to make Byzantium (Istanbul) the capital.

From Byzantine To Ottoman Empire

Emperor Constantine I, the Rome empire ruler, defeated the army of rival emperor Licinius near Chrysopolis on September 18, 324, and decided to rule in Byzantium (Istanbul), where he made the entire Roman Empire the capital, in the east and west. Within three weeks after the victory of the Roman Emperor Constantine, the New Rome 's founding ceremonies were held, and the much larger city was officially opened on May 11, 330. Constantinople would become one of the few cities in the world with its political, economic, religious and attractiveness. Until the rise of the Italian maritime states, it was the first city to trade, and until the middle of the 11th century the most powerful and prestigious city in Europe. Constantine's choice of capital had a profound effect on ancient Greece and Rome. He displaced the Roman Empire's center of power, moving it eastward and establishing the first permanent union of Greece. Culturally, Constantinople fostered a fusion of Eastern and Western traditions, art, and architecture. Religion; It was Christian, the State was Roman, and the language and outlook was Greek. The concept of the divine right of kings flourished there, with monarchs as defenders of the faith. Constantine's gold Solidus retained its value and served as a monetary standard for more than a thousand years. As the centuries passed, the Roman empire lasted for 1130 years in Istanbul, Constantinople, the center of the empire, would become as important as the empire itself; Constantine's new city walls now encompassed imperial buildings such as the completed Hippodrome begun by Septimius Severus, a huge palace, legislatures, several imposing churches, and streets decorated with numerous statues from rival cities. It tripled the size of Byzantium. In addition to other attractions of the capital, free bread and citizenship were given to the settlers, who would fill the empty spaces beyond the old walls (walls). There was also a welcome for Christians, tolerance of other faiths, and benevolence towards Jews.

Constantinople was also a religious center. In 381 it became the seat of a patriarch, second only to the bishop of Rome; The patriarch of Constantinople is still the nominal head of the Orthodox church. Constantine inaugurated the first ecumenical councils; the first six were made in or near Constantinople. In the 5th and 6th centuries, emperors were busy devising means to keep the Monophysites subordinate to the kingdom. In the 8th and 9th centuries, Constantinople was the center of a war between iconoclasts and defenders of icons. The matter was decided by the seventh ecumenical council against the iconoclasts, but not before much blood was spilled and countless works of art were destroyed. The East and West wings of the church drifted apart, and after centuries of doctrinal disagreement between Rome and Constantinople, a split occurred in the 11th century. The Pope first approved the sacking of Constantinople in 1204, then denounced it. Various attempts were made to bridge the gap in the face of the Ottoman threat to the city, but the divisive suspicion and doctrinal divergence were overwhelming.4. By the end of the century, Constantine's walls had become too restrictive for the wealthy and populous metropolis. Writing at the end of that century, St. John Chrysostom said that many nobles owned 10 to 20 houses and owned 1 to 2,000 slaves. Doors were usually of ivory, floors were covered with mosaics or expensive rugs, and beds and sofas were covered with precious metals. Population pressure from the inside and barbarian threat from outside encouraged the building of fortifications further inland on the peninsula. Builtin the 5th century during the reign of Theodosius II, these walls are still standing today. Under the reign of Justinian I (527-565), medieval Constantinople reached its peak. At the beginning of this reign, the population was estimated at around 500,000. During the suppression of the Nika Revolt, an uprising of the Hippodrome factions, in 532 much of the city was burned and most of the population was killed. The rebuilding of the destroyed city gave Justinian the opportunity to participate in a magnificent construction program, with many buildings still standing.

In 1082, the Venetians were allocated districts with special trade privileges in the city (across the Golden Horn there was a headquarters for foreign merchants in Galata). Later they were joined by Pisans, Amalfi Tans, Genoese and others. These Italian groups soon gained a stifling dominance over the foreign trade of the city. In 1203, the armies of the 4th Crusade deviated from their targets in the Holy Land and landed in front of Constantinople. The Crusaders were able to enter the city on 13 April 1204. After a general massacre, the looting continued for years. The crusaders appointed one of their own, Baldwin of Flanders, as emperor, and the Venetians, the main instigators of the Crusade, took control of the church. The Latins divided the rest of the country among themselves, while the Byzantines settled in Nicaea and Epirus (now northwestern Greece). The period of Latin domination (1204-1261) was the most disastrous period in the history of Constantinople. Even bronze statues were melted down for coins; All that was valuable was taken. Sacred relics were torn from temples and sent to religious institutions in Western Europe. Reclaimed by Michael (Palaeologus). For two centuries, the threatened Byzantine Empire led an unstable existence in the face of the rising power of the Ottomans. Some construction was done in the late 13th and early 14th centuries, but then the city was left in a shambles full of ruins and desolate lands, contrasting the prosperous state of Galata across the Golden Horn that had been given to the Genoese. When the Ottomans crossed into the European continent in the middle of the 14th century, the fate of Constantinople was determined. The inevitable end was delayed by the Ottoman defeat at the hands of Timur in 1402; but in 1422, the Ottoman sultan II. Murad besieged Constantinople. This attempt failed, but was repeated 30 years later. In 1452, another Ottoman sultan, II. Mehmed (Fatih Sultan Mehmet) blockaded the Bosphorus by erecting a strong fortress at the narrowest point of the strait; This castle, called Rumelihisarı, still constitutes one of the main symbols of the straits. The Istanbul siege began in 1453. Besides the overwhelming numerical superiority of the Ottomans, they also had cannons that pierced the ancient walls. The Golden Horn bay was protected by chains laid in the waters, but the Ottoman navy managed to cross the Bosphorus to the Golden Horn by land (the method of lubricating the bottom of the ships and aquaplaning). The last attack was on May 29, and despite the desperate resistance of the inhabitants, supported by the Genoese, the city fell. Byzantine emperor Constantine XI was killed in battle. 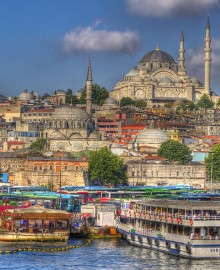 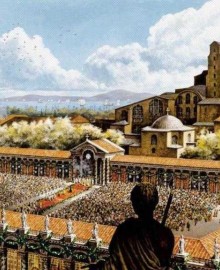 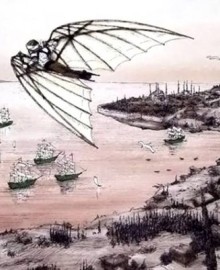 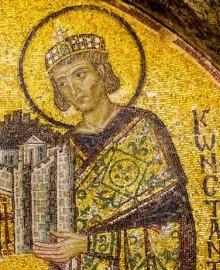 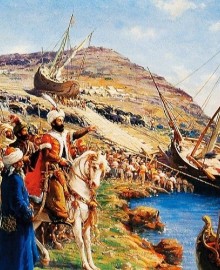 Our Services Conquest of Istanbul By Ottoman
Conquest of Constantinople

When Constantinople was captured by the Ottomans, it was almost deserted. Fatih Sultan Mehmet began to rehumanize this place by transferring populations from other conquered areas such as the Peloponnese, Thessaloniki and the Greek islands. In about 1480, the population rose to between 60,000 and 70,000. Hagia Sophia and other Byzantine churches were converted into mosques. The Fener Greek patriarchate was retained, but later moved to the Church of the Virgin Mary of Pammakaristos to find a permanent place in the -Balat district. Sultan Mehmet (where the university is now), the Old Palace and the Topkapi Palace, which still exists; He had Eyüp Mosque built on the Golden Horn and Fatih Mosque built on the site of the Apostles Basilica. The capital of the Ottoman Empire was moved from Edirne to Constantinople in 1457.

After Mehmet the Conqueror, Istanbul experienced a long and peaceful period of uninterrupted growth, excluding natural disasters - earthquakes, fires and epidemics. The sultans and their ministers devoted themselves to building fountains, mosques, palaces and foundations, so the city's appearance soon changed completely. The heyday of Turkish construction coincided with the reign of Ottoman ruler Suleiman the Magnificent (1520-66).


History Of Turkey
Westernization Of Istanbul

The next major change in the history of Istanbul occurred at the beginning of the 19th century when the disintegration of the Ottoman Empire was approaching. This period is known as the period of internal reforms (Tanzimat). The reforms were accompanied by serious disturbances, such as the massacre of the Janissaries at the Hippodrome (1826). Progressive Ottoman Sultan II. With Mahmud's victory over the conservative opposition, the westernization of Istanbul began rapidly. From the 1830s, it was flooded by European visitors who could reach Istanbul by steamships. The first bridge over the Golden Horn was built in 1838. In 1839, the Ottoman Sultan Abdulmecid I issued an edict guaranteeing the safety of life and property of all his subjects, regardless of their religion. The process of westernization accelerated further with the Crimean War (1853–56) and the settlement of British and French troops in Istanbul. The end of the 19th and the beginning of the 20th century was marked by the introduction of various public services: European railways to Istanbul began in the early 1870s. The underground tunnel connecting Galata to Pera was completed in 1873; Regular water supply to Istanbul and settlements on the European side of the Bosphorus was brought after 1885 by the French company La Compagnie des Eaux from Lake Terkos on the Black Sea coast (.47 km from the city; electric lighting in 1912, electric in 1913 and 1914. streetcars and telephones began to be used. An adequate sewer system had to wait until 1925 and beyond.


How Constantinople Fall Down
Constantine I 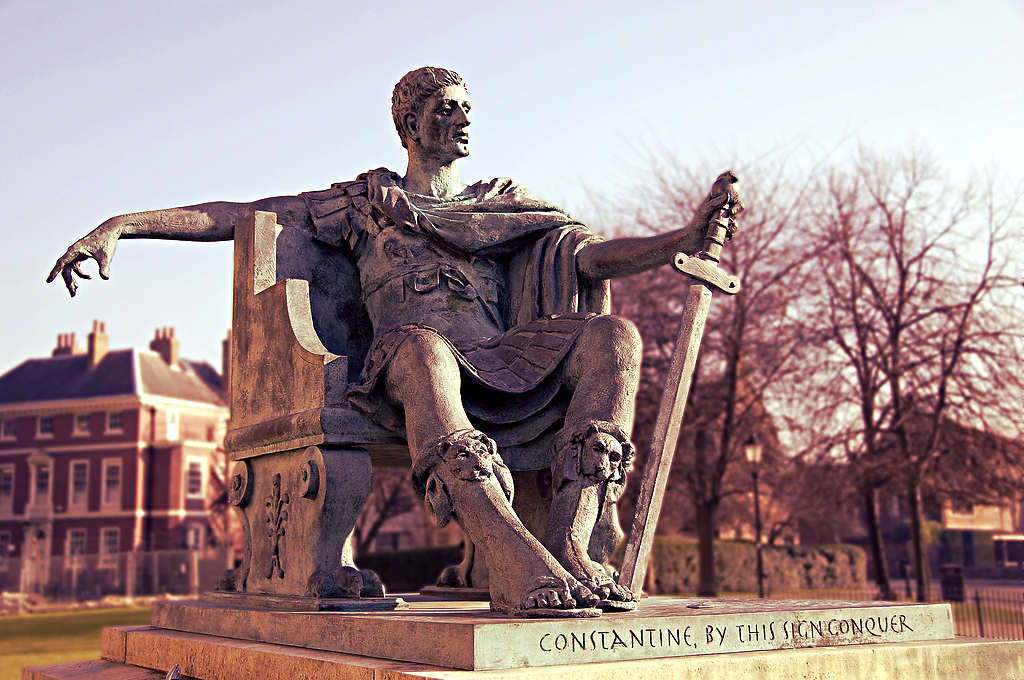 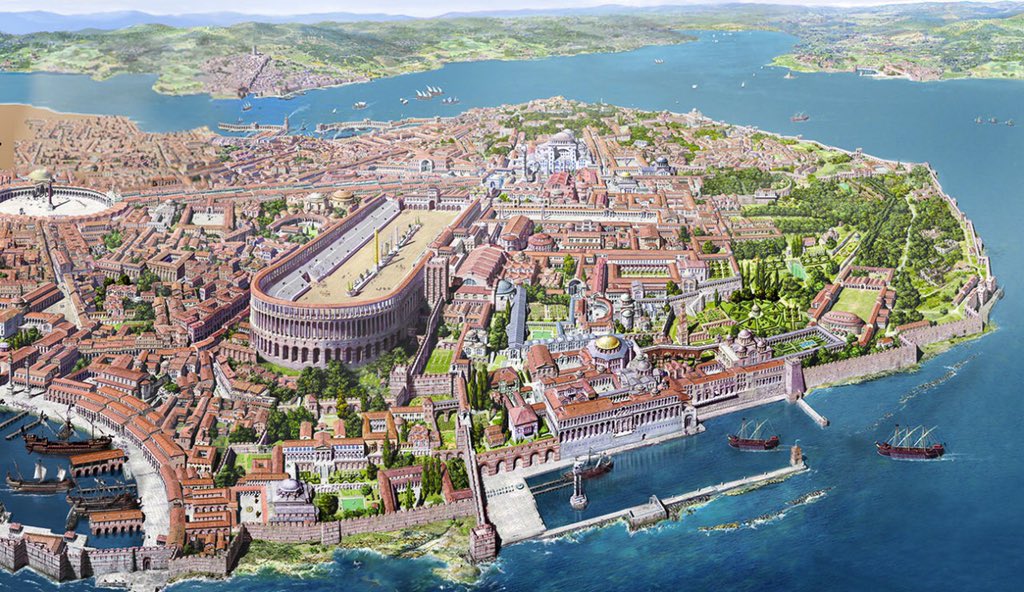 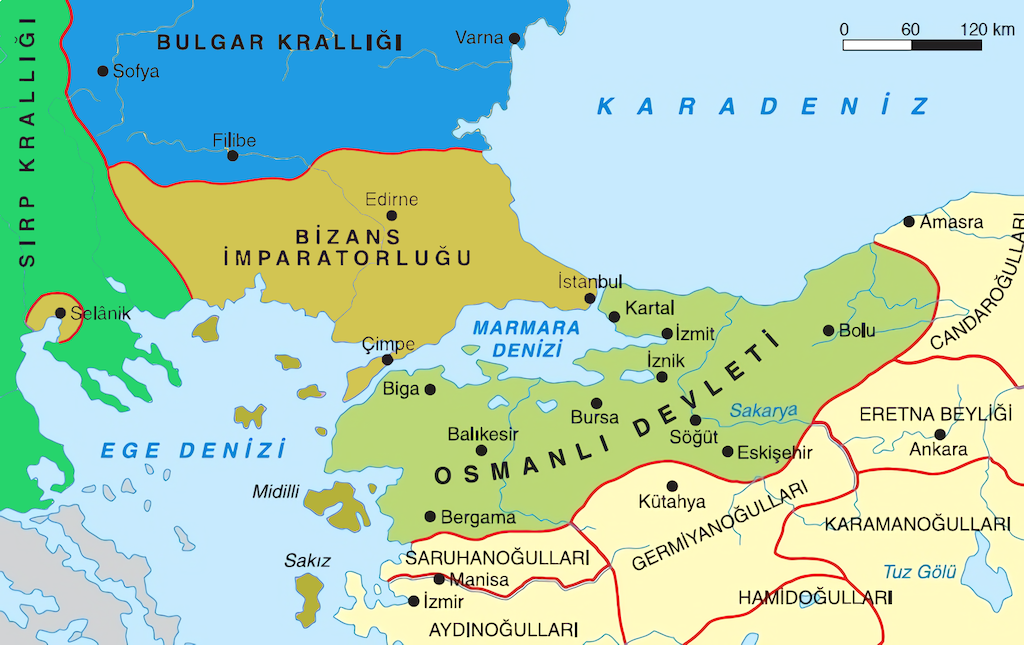